Is Shakespeare still relevant 400 hundred years after his death?

My son and I have different opinions on the relevancy of Shakespeare in our modern world. Greg thinks Shakespeare’s works have become irrelevant and would prefer to study more modern writers who have written about issues that have shaped our modern world.

He would rather study 1984 by George Orwell which is about totalitarianism, discrimination, tracking and other issues that, in his opinion, are still a concern today. He sees Fahrenheit 451 by Ray Bradbury as being relevant because he does not see people burning books in Western society.

I disagree with Greg on both counts but I am limiting this post to my thoughts about the relevancy of Shakespeare, who just happens to be one of my favourite authors.

These are the reasons that I think it is still worthwhile for students to study literature:

We quote Shakespeare all the time

Shakespeare invented over 1700 of our common words. He did this by changing nouns into verbs, changing verbs into adjectives, connecting words never before used together, adding prefixes and suffixes, and devising entirely original words.

Some of my favourite Shakespeare originated words are green-eyed, assassination, bloodstained, lustrous and obscene.

In addition to all the words Shakespeare invented, he also put words together in new ways to create phrases and idioms. Most people know the famous quotes which are commonly attributed to Shakespeare including:

Many people don’t realise, however, that many everyday sayings are attributable to Shakespeare such as be all and end all, catch a cold, heart of gold and to much of a good thing.

His works are universal and enduring as are his characters

Shakespeare’s plays portray timeless themes of human experience and interaction that have remained relevant since his death. They are also considered to be among the most expertly written and beautifully poetic works in the history of literature.

The outstanding features of Shakespeare’s play are as follows:

What is your view? Do you think Shakespeare is still relevant? If not, what would you have preferred to study instead?

I am an author who has recently branched into adult horror and supernatural writing and, in order to clearly differential my children’s books from my young adult and adult writing, these will be published under the name Roberta Eaton Cheadle. My first young adult supernatural novel, Through the Nethergate, has recently been published.

I also have two short paranormal stories in Whispers of the Past, a paranormal anthology edited by Kaye Lynne Booth.

The Gamma Sequence, by Dan Alatorre is a non-stop action, futuristic medical thriller. The suspense begins to build on the very first page and keeps on ratcheting up the tension from there, with twists and turns that will keep readers on their toes.

Hamilton DeShear is a private detective and former cop, who isn’t looking for a mystery to solve. But when the mysterious Lanaya Kim arrives on the scene claiming to need his help, how can he refuse? There’s no turning back once his apartment goes up in flames and the game turns personal.  Soon enough people are shooting at them, the stakes are raised and it will take all of DeShear’s skill and expertise to keep them alive. Genetic research is the name of the game, but not everyone is playing by the same rules. Things aren’t always what they seem, and this certainly appears to be the case here. There’s a killer on the loose, who is targeting the scientists who worked on a secretive project which Lanaya was involved with, but can DeShear unravel the mystery and figure out what is going on before he and Lanaya are taken out of the game?

The Gamma Sequence will be available next month as a part of the Do No Harm medical thriller box set. You can preorder now.

Nail biting suspense that keeps you on the edge of your seat. The Gamma Sequence does everything a good thriller should. I give it five quills.

There are many wonderful classic books available to people who are interested in reading them. I have recently re-read War of the Worlds and The Time Machine, both by H.G. Wells and also Dracula by Bram Stoker. I read these books in my early teens and, while I did enjoy them, I don’t remember appreciating any of the subtleties of the development of the characters in these books or the psychological and philosophical aspects either. This is because I did not have the life experience at that time to appreciate these concepts and their incredible appropriateness and cleverness.

I have never restricted or limited my children’s reading choices. This is because I believe that children can only experience and visualise the written world in the context of their own life experiences. If a child has never attended a funeral, they cannot visualise the white and haggard faces of the surviving family, smell the heavy and potent aroma of the funeral flowers or understand extreme expressions of grief such as throwing oneself onto a coffin as it is slowly lowered into the ground, in the same way someone who as actually witnessed such events could. They can read and appreciate the words but their ability to picture the detail is limited to their own visual experiences. This is not the case with television which supplies a ready-made visual to put the image into your mind regardless of your own experience. It is for this reason that I think that abridged classics are appropriate, and even ideal, for children.

Abridged classics expose children to the joys of great literature and enable them to appreciate their stories without struggling to understand words and concepts that are beyond their current reading and life abilities. In other words, abridged classics stimulate an interest in the storyline and characters while not burdening the child with all the deep emotion and psychology that is present in many classic books. If the child is excited by the story, there is a high chance he will revisit the book as an adult and read the full, unabridged version with greater understanding and appreciation.

I bought all the Classic Starts books as well as a set of abridged Shakespearean plays and Chaucer’s stories for my son. My older son was mesmerised by certain stories such as The Phantom of the Opera, The Secret Garden and The Red Badge of Courage. I well remember him recalling these books with such fondness that a few years later, when he was about 13 years old, he read the unabridged versions of these books with great enthusiasm. He also went on to read a significant number of other classic books and represent South Africa as part of the St John’s College Prep team at the Kids Lit Quiz in New Zealand in 2016. I remember Gregory laughing aloud over the abridged versions of Canterbury Tales and The Taming of the Shrew. I do think these cultural experiences of English help set him up with a love of reading for life.

Reading abridged classics also allows children to access books that have been written in old English and are difficult for modern children [and adults] to read for that reason. These books allow us all access to humorous, dramatically and other situations from the past and allow us to learn more about our own history and path of evolution and change. 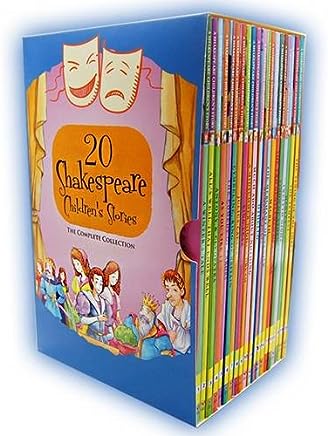 I believe there is a lot of benefit to be had from reading abridged classics to your child and letting them read them on their own. What do you think? Let me know in the comments.

Hello, my name is Robbie, short for Roberta. I am an author with five published children’s picture books in the Sir Chocolate books series for children aged 2 to 9 years old (co-authored with my son, Michael Cheadle), one published middle grade book in the Silly Willy series and one published preteen/young adult fictionalised biography about my mother’s life as a young girl growing up in an English town in Suffolk during World War II called While the Bombs Fell (co-authored with my mother, Elsie Hancy Eaton). All of my children’s book are written under Robbie Cheadle and are published by TSL Publications.

I have recently branched into adult horror and supernatural writing and, in order to clearly differential my children’s books from my adult writing, I plan to publish these books under Roberta Eaton Cheadle. I have two short stories in the horror/supernatural genre included in Dark Visions, a collection of 34 short stories by 27 different authors and edited by award winning author, Dan Alatorre. These short stories are published under Robbie Cheadle.

I have recently published a book of poetry called Open a new door, with fellow South African poet, Kim Blades.

Want to be sure not to miss any of Robbie’s Growing Bookworms segments? Subscribe to Writing to be Read for e-mail notifications whenever new content is posted or follow WtbR on WordPress.