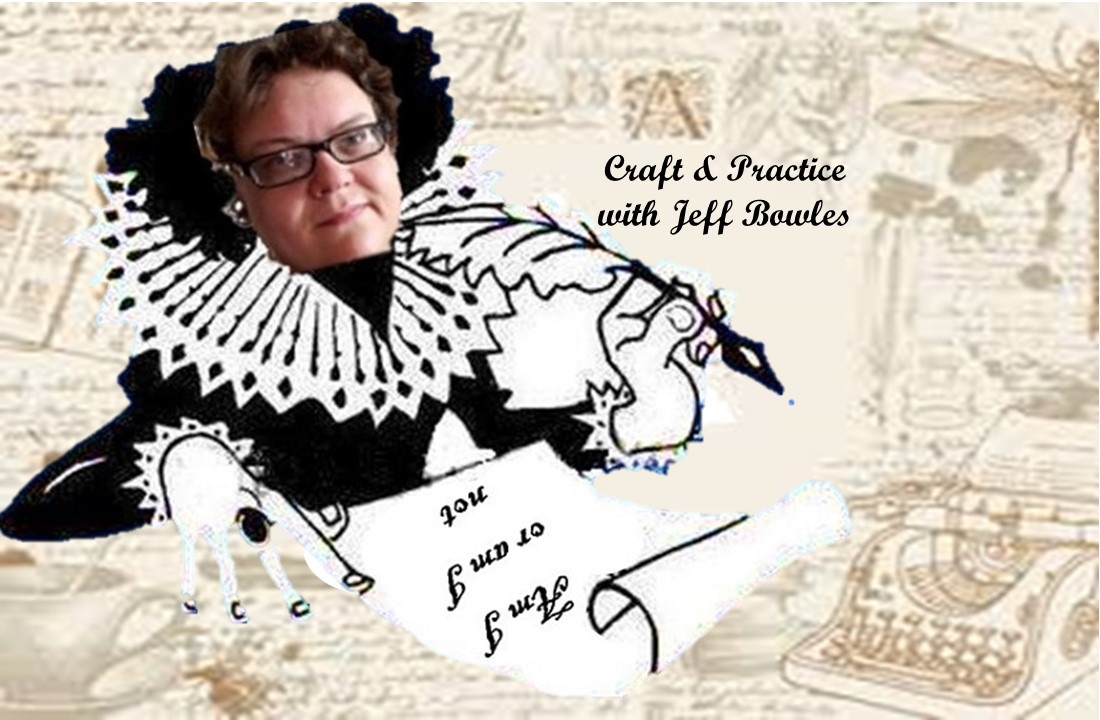 Each month, writer Jeff Bowles offers practical tips for improving, sharpening, and selling your writing. Welcome to your monthly discussion on Craft and Practice.

To Comma or not to Comma

Basic rules of grammar and punctuation aside, I find that many writers, regardless of experience or education, have a hard time with commas. Oh sure, most people breeze right through them, place them wherever they figure they ought to go. It can’t be that hard. Readers know better than to pick apart our comma usage. Aside from periods, commas are the most common punctuation mark we make. If anything, semicolons are a lot scarier, right? I mean, how the heck do we even use semicolons?

A semi-colon, in its most common usage, is properly deployed between two completely independent yet related clauses. Commas, on the other hand, have a wide variety of applications. Connecting ideas, creating lists, separating dialogue and dialogue tags, and let’s not forget the old Oxford comma, which confuses and infuriates people left, right, and sideways.

Don’t worry. This isn’t going to be a boring post dedicated to the rules of the English language. The truth of the matter is that schools and writing programs all over the world place more emphasis on basic mechanics than they do on style. And why is that? Because style is more or less unteachable, and in developing our unique voices as writers, we often learn to break the rules as soon as the authorities that be teach them to us.

For instance, check out this classic line from Charles Dickens:

We’ve got all the makings of a terrible run-on sentence here, haven’t we? How’d he get away with it? If the grammar authorities were in charge, he wouldn’t have. Grammarly tells me it’s okay Dickens wrote his classic introduction to A Tale of Two Cities in such a manner because Dickens often used rambling language to satirize long-winded speakers of his time. I think that’s nonsense. Dickens wrote like this because it was his style. And no one was going to criticize him because he was Charles Dickens. Will anyone criticize you for similar crimes, real or imagined? Maybe it’s time to find out.

If you’re planning on being an indie writer, or if you already are one, recognize you have potentially earned yourself a bit more freedom in this playing field. You can toss out commas till the cows come home, and no one will bother you about it. Well, maybe sometimes they will. If, however, you’d like to publish via a more traditional route, get ready for some intense editing, because your comma usage doth rain like flash storms on the Serengeti.

Are you a stickler for form? Or do believe rules are meant to be broken? I have to admit, I’m kind of on the fence on this one myself. I do hate to see a misused comma, but I’m also cognizant of the fact that the written word is our ultimate tool for communication, and that for it to remain relevant in today’s fevered world, it needs to reach people on an individualized level. That means there’s room for all types of writing, all styles, as many variations as there are working writers in the world. I’m thinking more of a glorious rainbow than a unified, boring color-scape in which no piece of writing stands above another.

In a now famous interview with Oprah, author Cormac McCarthy took to task the basic institution, tradition, and prescription of punctuation.

“I believe in periods, in capitals, in the occasional comma, and that’s it,” McCarthy said. “I mean, if you write properly you shouldn’t have to punctuate.”

And how do we feel about that? Surely, our teachers and professors would’ve torn our earliest writings to shreds for ignoring quotation marks, colons, semicolons, dashes. You’re going to find a hundred articles on how to use this and not to use that. Very few so-called authorities will council you to write in a broken and unusual manner like your favorite poet does.

Regardless of where you come down, you have to admit a certain disconnect between what we teach our kids about writing and the actual job done by actual writers. Thanks to the invention of online communication, we’ve raised a generation of kids who struggle with grammar and punctuation anyway. I envision a future in which writing is a terribly fluid, wonderfully flawed thing. Is it better to know the rules before you break them? Yes, I think so. But I also believe the game should never be played exclusively by people who know the rules. That’s elitism, a facet of our creative nature that ruins more great work than it helps.

Writing in the modern world is not meant for the few. Thank God for that. Anyone with the desire now has the ability, more or less. Your voice deserves to be heard as much as mine. If I didn’t believe in that, I also wouldn’t believe in things like Democracy, term limits for our elected officials, and a world free enough it hasn’t outlawed pizza yet.

Let us pray the grammar police are never put in charge of pizza.

Keep your chin up, keep studying those rules, especially if you’re new to writing or publishing. But if you find your writing is flawed, know you’re in terrific company. How about that intro to a Tale of Two Cities, huh? Better than a warm glass of milk and a comfy blankey.

Want to be sure not to miss any of Craft and Practice with Jeff Bowles segments? Subscribe to Writing to be Read for e-mail notifications whenever new content is posted or follow WtbR on WordPress