Playground for the Gods: A science fantasy adventure series that almost wasn’t 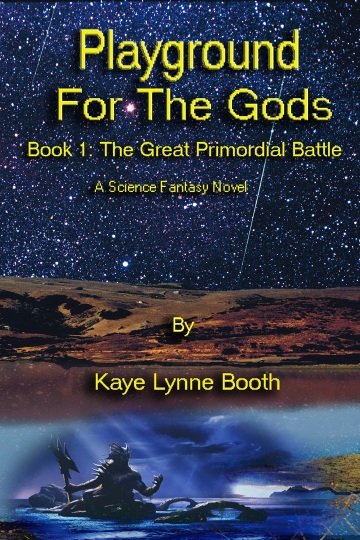 If you know me, or have been following me for a while, you might know that my Playground for the Gods series originated as my thesis project. When I presented my proposal, the feedback I got repeatedly was that I was trying to cram too much into the book and it wasn’t going to work. I had instructors tell me that what I proposed would be a tomb, if I ever finished it, which was doubtful, and my advisor said he there wasn’t even a genre for my tale, which combines the technology and space travel of science fiction with the mythology and folklore, and seemingly magical events therein. There were echos of my instructors’ doubts from the members of the cohort I found myself in that semester, some even saying there was no way I could pull it off.

In Playground for the Gods, the palnet of Atlan is destoyed and the Atlan people make pre-historic Earth their new home, posing as gods and goddesses, and using their advanced technology to perform miraculous feats that awe humans. In Book 1: The Great Primordial Battle, the Atlans fight amongst themselves in a struggle to prevent their new home from being destroyed as Atlan was. A strong female protagonist, Inanna, heads up the battle against serpents, dragons, and  other forms of mythological creatures, mined from the annals of all parts of the globe, in an effort to save Earth. In this story, readers learn all the background information needed to build a basis for the subsequent texts, and there is enough of it to form a stand alone book. (Book 2: In the Begnning is outlined and partially drafted, and Book 3: Inanna’s Song is outlined and has portions already written, although not pieced together in any organized fashion yet.)

In one of the first classes, we had been cautioned to remember that any criticism of our work was not personal, it was about the work, not about me as a person, but when faced with so many telling me I couldn’t do what I wanted to do, what I believed I could do, it wasn’t as easy as it sounds, and I was hurt by their doubt. But, once I licked my wounds and dried my tears, and distanced myself from the work, I realized that much of what they had said was true. They were right, at least on some points and the story will be better for it.

My solution was to turn my thesis novel into a science fantasy series, and write the only the first book as my actual thesis project. The size of the first book, The Great Primordial Battle, let me know that this was a smart decision. (My professors and cohorts were correct in that trying to put it all into one book would have created a massive tomb.) The draft should be back from the beta reader today to begin the final revisions, and after hitting a snag that must be worked out before work can proceed on my memoir, I excited to get started in the final stretch with this one. Upon publication, this book will truly be the beginning of a science fantasy series that almost never existed.

In March, Writing to be Read celebrates science fiction and fantasy, and everything in between. Science fiction springs from imaginings of what ifs, regarding technological advancements and futuristc worlds and universes, while fantasy fiction involves impossible or improbable events usually involving magic, or magical creatures or objects grounded in myths, legends and folklore of old. Both of these genres takes us to fantasical places and awe readers with amazing feats of courage, and good usually overpowers evil. Both entertain us, and are often addicting. In the current book market, there are many books which fall into a genre that is somewhere in between.

There are more subgenres for both of these genres than a person is able to count, including stories which feature elements of both. When I wrote my thesis proposal for what will one day be my science fantasy series, Playground for the Gods, I was told there was no genre for a story with both science fiction and fantasy elements. But in fact, there is such a genre as science fantasy, and there are many books out there today that fall into it. I recently reviewed one featuring alien life forms and a powerful magic object, Rogue Crystal, by Jordan Elizabeth in last Friday’s post.

As mentioned above, Playground for the Gods was originally proposed as my thesis story. It is a tale of aliens, Atlans, who come to pre-historic Earth when their planet is destroyed, and act as gods and godesses, forming human beliefs about devine matters, and creating the fondation for myths and legends of ancient history. The character names were all chosen from ancient summerian names, and many of the subplots parrellel those same myths and legends, adding new twists. In order to maintain the appearance of gods, they use their advanced technologies to appear magical and all powerful, each one wielding the ability to fall into different personas throughout time, providing basis for all world myths and religions around the globe.

It’s a lot of story, and many said it was too big and couldn’t be done, so I broke it down into four novels, which follow the Atlan through earth’s history to present day, and perhaps even beyond Book 1: The Great Primordial Battle tells the tale of the Atlans arrival on Earth. and tells how the heroine, Innana tries to stop the same Atlans who caused the destruction of their home planet from detroying their new home, as well. All whhile working to find a cure for her sister, Ereshkigal’s wasting desiese which is eating her up from the inside out. This story is curently with my beta reader, although I was hoping she’d have it back to me by now, so I could share my excitement, because it is very close to being publication ready.

Among the great science fiction authors we find familiar names: Isaac Asimov, Ray Bradbury, and Edgar Rice Burroughs.  More recently, we have Robin Wayne Bailey, Richard Bachman, who we all now know is Stephen King, Dean Koontz, John Scalzi and Kevin J. Anderson. (Don’t forget to  catch my interview with Kevin J. Anderson next Monday on “Chatting with the Pros”. You won’t want to miss it.) Fantasy authrs who may come to mind are J.R.R. Tolkien, George R. Martin, J.K. Rowling, R.A. Salvator, Ray Bradbury, Stephen King, and Kevin J. Anderson. As you can see, there is some crossover of authors from one genre to the other; there are authors who write in both.

This month, in additon to my interview with K.J.A. and my review of Rogue Crystal, I also have my review of Kevin J. Anderson’s Selected Stories: Science Fiction Volume 2, and an interview with fantasy author Laurel McHargue.  I do hope you’ll drop by.

P.S. Be sure to check out my science fiction time travel short, Last Call, and my dystopian short, “If You’re Happy and You Know It” in the Collapsar Directive science fiction anthology (Zombie Prirates Publishing). 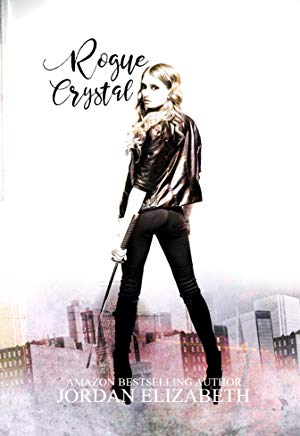 Rogue Crystal, by Jordan Elizabeth is a futuristic science fantasy adventure novel featuring magic weilding aliens and an unsuspecting heroine, who may be the key to saving the world, with several surprise twists along the way. Both science fiction and fantasy fans will enjoy this story, as it has elements from both genres.

Avery thought a trip to Scarya, a secret rendevous with her boyfriend diguised as a journey to the country of her ancestral origins for her parents benefit, would be a great time. But when her cousin’s archeology team uncovers a sword which draws her to it and then disappears, things begin to get a little freaky. Suddenly, it seems that everyone is after her and she doesn’t know who to trust. Except for DeClan, her boyfriend and long time sweetheart, whom she trusts explicitely. But something isn’t right. His uncnny ability to show up just when needed and his unconditional acceptance of what Avery tells him, no matter how strange or unusual makes the reader wonder if he might not be what he appears to be, as they uncover a centuries old family history of alien origins and a struggle to save the world. While all this is a little unsettling, it’s nothing compared to Avery’s surprise when she learns that she holds the crystal which holds the power to destroy the world.

This story combines elements of science fiction and fantasy into a well crafted adventure which fans of both genres can enjoy. I give Rogue Crystal four quills.