“Echo One”: A story collection from the Secret World Chronicles

In my theme post for this month, I admitted that comic books and superheroes are not my usually reading fare, but in the spirit of our May celebration, I felt the need to review outside of my norm. Echo One, by Mercedes Lackey, Cody Martin, Dennis K. Lee and Veronica Giguere is an anthology of short stories which are set in the Secret World Chronicles universe, which I am unfamiliar with, so in reading this book, I’m at a slight disadvantage. However, as I read through these delightfully entertaining stories, a few things about the Secret World Chronicles universe quickly became clear, and although I had no backstory on these characters, I was easily able to immerse myself in each individual story, and invest myself in some of the characters, particularly Vicky Nagy and her rather unusual family.

This secret world takes place during WWII, and humans with super powers, called metahumans, exist on both sides of the conflict, which makes them excellent superheroes and supervillains. As you can imagine, the possibilities of metahumans on the German side triumphing, open up a plethora of world altering consequences that must be prevented. Great superhero stuff!

In addition, there are others whose powers lay in the world of magic, opening up realms of possibilities for the good guys to save the world. They are of a secret society, with only a few select humans who are aware they anything but the metahumans they pass themselves off to be. I found these stories to be really fun reads, and I didn’t have to know all the details of previous tales in order to enjoy them thoroughly. The characters are colorful and unpredictable, with the potential for surprise lurking behind every turn of the page.

Alternate universe superhero stories are always fun and entertaining reads, and Echo One is no exception. Great for those times when you’re not in the heavy literary mood and are just reading for the pure enjoyment of it. I give it four quills.

I recently had the pleasure of reviewing two horror novels written by this month’s author guests; Arcana, by Paul Kane and Cold Black Hearts, by Jeffrey J. Mariotte. I found it interesting that these two authors chose one or two lines that were so similar to begin these very different horror stories. Both beginnings are designed to grab the reader and reel them in, and in both stories, it worked. The hook was instantly set.

“They were all going to die.

But it was for the cause, and they were not only glad to do it – they felt compelled to do it.”

“They were dead, all of them dead, and so was she.”

Both authors bring us into the story in the middle of the action at the point of impending death. We don’t know what is happening yet, but we know the speaker in each case is about to die. How does anyone walk away from that without reading more?

Both Arcana and Cold Black Hearts are horrific stories of evil and death, but they each present horror stories of distinctive and different flavors. Although each presents the battle of good versus evil, the resulting stories are very different, yet each has the ability to captivate their audience and satisfy whatever it is inside of us that makes horror such an appealing genre to us.

Arcana, by Paul Kane takes place in an alternate universe with a future where magick is very real and has survived through the Arcana culture, despite repeated efforts to exterminate them from the planet. It’s a world where torture is still used to extract confessions from those suspected of using the the ancient arts, and Callum McGuire is an orphan who bears a hatred for the magick communities  responsible for the terrorist attack that left him alone, to be raised in an orphanage with a brutal matron. As a young M-forcer, dedicated to stopping Arcana after a recent series of terrorist attacks carried out by the group. The viciousness and brutality against Arcana is broadly directed, and as Callum watches innocent children fall prey to it, his own morality tells him that something isn’t right. When he guesses that his friend and neighbor is secretly Arcana, he is swept into the Arcana culture as he tries to protect her from being apprehended by his fellow M-forcers. This tale is cleverly crafted to let the story unfold in a series of discoveries which lead Callum to think that things are not the way he’d been lead to believe, even as more terrorist attacks take place, and his friends in Aracana try to convince him that he is the savior of their prophecy. Savior or destroyer? The power is in Callum’s hands and only he can decide.

Arcana takes readers on a hero’s journey beyond death and back in a world where anything is possible. That, my friends, can be a very scary journey. I give it five quills.

In Cold Black Hearts, by Jeffrey J. Mariotte, evil stirs the ancient legends into reality. When Annie O’Brian is caught in a bust gone bad and the resulting explosion, she loses both her hearing and her job, but she gains an uncanny sense of empathy for the people around her. So, there’s nothing to stop her from taking a job investigating a four year old murder where the original investigation was botched, and working to free the convicted man, even though he gives her the creeps and is probably guilty of numerous crimes, if not this one. Her investigation uncovers not only the evidence needed to free Johnny Ortega from prison, but also evidence that there is something much more sinister going on in Hildalgo County than a simple cover-up, but when Annie manages to put all the pieces together and tries to stop the return of an ancient demon, it could cost her her life, or worse.

Filled with sacrifice and betrayal, Cold Black Hearts will chill you to the core of your soul. Lots of unexpected twists and turns to this story. I give it four quills. 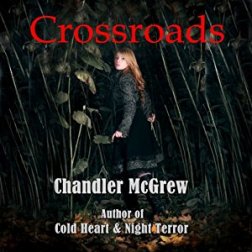 Crossroads by Chandler McGrew is an alternate world YA story about a young girl, Kira, who finds herself on the run with her friend, Jen, after her parents and her carnival family are massacred. Unsure of where to go, but following her instincts, Kira explores her other-worldly powers which allow her to create, and uncreate, by will, learning about her family’s true origins and discovering that only she can save the last of her people.

It’s a role she didn’t ask for, and she doesn’t want as she realizes that she and Jen are being pursued and everyone she comes into contact with dies. Then she meets Sheila, who has the gift of talking to the dead, and is tied to Kira and the world beyond the mirror, although neither knows it. They go through the mirror and embark on a quest to stand against the evil empty-eyed man, who has overtaken Dream Time, (the world beyond the mirror, and is trying to overtake all worlds.

Crossroads is character-driven with a strong story line, but it is almost a little too convenient that although she does not understand what she is supposed to do, Kira always knows what to do when the time comes to do it. The answers just seem to come to her. I give it four quills.