“Echo One”: A story collection from the Secret World Chronicles 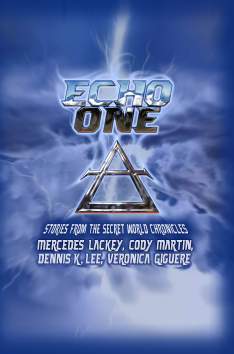 In my theme post for this month, I admitted that comic books and superheroes are not my usually reading fare, but in the spirit of our May celebration, I felt the need to review outside of my norm. Echo One, by Mercedes Lackey, Cody Martin, Dennis K. Lee and Veronica Giguere is an anthology of short stories which are set in the Secret World Chronicles universe, which I am unfamiliar with, so in reading this book, I’m at a slight disadvantage. However, as I read through these delightfully entertaining stories, a few things about the Secret World Chronicles universe quickly became clear, and although I had no backstory on these characters, I was easily able to immerse myself in each individual story, and invest myself in some of the characters, particularly Vicky Nagy and her rather unusual family.

This secret world takes place during WWII, and humans with super powers, called metahumans, exist on both sides of the conflict, which makes them excellent superheroes and supervillains. As you can imagine, the possibilities of metahumans on the German side triumphing, open up a plethora of world altering consequences that must be prevented. Great superhero stuff!

In addition, there are others whose powers lay in the world of magic, opening up realms of possibilities for the good guys to save the world. They are of a secret society, with only a few select humans who are aware they anything but the metahumans they pass themselves off to be. I found these stories to be really fun reads, and I didn’t have to know all the details of previous tales in order to enjoy them thoroughly. The characters are colorful and unpredictable, with the potential for surprise lurking behind every turn of the page.

Alternate universe superhero stories are always fun and entertaining reads, and Echo One is no exception. Great for those times when you’re not in the heavy literary mood and are just reading for the pure enjoyment of it. I give it four quills.