“Darkscapes”: Stories That Will Keep You Reading 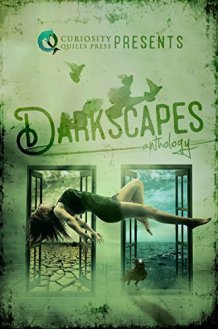 Darkscapes is a top quality anthology of short stories put out by Curiosity Quills Press. I must say, this anthology delivers on the promise of the premise. The title says that the stories within may be on the darker side of things, where danger lays hidden beneath the layers of the mind’s eye. The cover image tells me I’m in for some rather unusual stories, ones that go to places which may defy logic. And, having read many books produced by Curiosity Quills Press, the fact that they published this book says it’s a collection of good quality, well-written stories. And that my friends, is exactly what I got – all of the above.

There are twenty-one stories contained in this collection, too many to be able to discuss all of them here. So, I will give you a brief overview of the six, yes six, stories which I deemed to deserve a five quill rating, meaning the authors of these stories have done an exemplary job of storytelling. Keep in mind that these stories are the best of the best in this collection, but all of them are good reading.

The first story in the anthology, Exley Avenue, is an extremely well-written ghost story of sorts, with a surprise ending. Going between the 1920’s and the twenty-first century, storytellers Jordan Elizabeth and W.K. Pomeroy unravel the unsavory history of the stone castle on Exley Avenue, when several bodies are uncovered on the premises.

Further into the collection is a cute noirish story, with an unlikely P.I. for a protagonist, which is sure to keep you chuckling until the end is Skeleton Jim, by J.R. Rain. Noir with humor is the only way to describe this bizarre tale. But, rest assured, Skeleton Jim always gets his man, (and the girl, for some reason). Things are no different when the client, Lucy Newman, hires him to find out if she killed her abusive husband, and who is blackmailing her, Jim may have his work cut out for him. No bones about it. (Skeleton humor. Har, har, har.)

Then, there is The Giovanni Effect, by Robert J. Defendi, an extremely well-crafted story with excellent world building. Readers will live this one. On a desert outpost planet where sand and wind are constants, Allred and his wife and child are the planets only occupants. They’ve always known others might come, but when a ship lands on the planet Allred is forced to put their emergency plans to the test. The planet’s harsh atmosphere may be the death of him, or it might just be his savior.

The forth story, Landing a Job in the Private Sector, by Rena Rocford, kept the pages turning with the best of them. Furies are conditioned assassins, but when Boxy, an enslaved fury acquires an organic ship that is loyal to her, and becomes a rogue mercenary, she learns that everything is negotiable, even under pressure.

The fifth five quill story is Out of Sight, by Mathew S. Cox. Sima is a street kid, who wakes up to find she’s been relocated to another planet and her pod crashed. She all alone, with no supplies, no clothes and no idea where she is. But then she discovers three other children who were sent here, as well, and she has more to worry about than just her own survival.

The One You Feed, by Katie Young was the last story in this collection to fall into my best of the best list. This was a well-written werewolf story, which left me wanting more. Dupree is haunted by more than just werewolves. As he spins his tale for the cowboy he just hired on with at the last rodeo, we learn more about the ghosts who haunt his past, and the curse that controls his future.

The above mentioned stories are, in my opinion, the best stories in this collection. However, they are all entertaining tales. I wouldn’t rate any of the stories in this collection with less than three quills. They really are that good. The smashing cast of talented authors whose work appears in this anthology also includes: Richard Roberts, Ann M. Noser, Randy Attwood, Nathan Croft, Tegan Wren, James Wymore, J.P. Sloan, Andrew Buckley, Darin Kennedy, J.E. Anckorn, Piers Anthony, B.C. Johnson, S.E. Bennett, Mark W. Woodring, and Benjamin Sperduto.

Overall, I give Darkscapes four quills.