“Webs of Perception”:The Final Chapter of a Saga

Webs of Perception is the final novel in Darlene Quinn’s Webs series – the saga of  a high profile family in the high-end retail industry, the Taylors, who meet with more than their share of adversity, but always stand tall and come out stronger for it.

In this final novel, disaster strikes once again, in the form of a gigantic rogue wave, which blindsides an ocean liner, with the two Taylor twins on board, and it appears one was swept overboard and the other has developed amnesia from the impact, leaving open many questions and few answers. The reader is caught up in the mystery almost from the moment they open the front cover.

The use of multiple POVs and multiple voices is daring and inovative – creative way to get around the question of how to refer to an amnesia vicim, whose identity hasn’t been established. Short chapters keep the story moving at the perfect pace. This book is a relaxed read which never falters in tone, and is a smooth, easy read.

As the last book in the series, I can see how Webs of Perception might not work as a stand alone novel. I believe there are too many characters, as well as too much background to read this novel without the knowledge from earlier books in the series. I’ve read and reviewed two, (Twisted Webs and Unpredictable Webs), and still I had difficulty keeping track of the who’s who among the secondary players. But, as a wrap-up novel for the series, which it was crafted to be, I felt it was absolutely perfect.

I give Webs of Perception five quills. 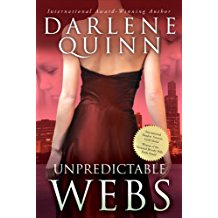 Unpredictable Webs by international award winning author, Darlene Quinn, is an intricately plotted and tightly woven story of mystery and intrigue. A vivid cast of characters, who all think they know what’s best keep the pages turning. Although the book is a single piece in a much larger tapestry, it easily works as a stand alone for those who have not read other books in Quinn’s Web series.

As moguls of a major department store chain, Conrad and Ashleigh Taylor are open targets for attacks from all directions. Whether from protesters, who don’t want the iconic name of John Stewart’s to be swallowed whole by their Jordan’s conglomerate, or predators who see only dollar signs when they consider the wealthy couple, the threats are always near. When one predator goes after one of their twin teenage girls in a kidnapping gone awry, there is no telling what will happen next, and the Taylors will stop at nothing to get their daughter back.

Unpredictable Webs is a complex tale of suspense, which keeps readers on their toes with skilled crafting and well developed plot. I give it four quills.