“Perils for Portents”: A Steampunkish Novel with a Heroine to be Admired 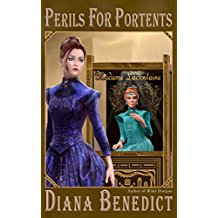 Perils for Portents, by Diana Benedict is a well crafted story and a truly enjoyable read. Taking place in an era when women had to struggle to be taken seriously, young Francie Wolcott proves a heroine who young women today can look up to in a story of mystery and adventure.

When their parents die, Francie and her brother, Rooney, are left to make their own way in the world. Francie uses her resources, combined with Rooney’s ingenuity to travel across the country by unconventional means, to their uncle and grandmother in San Francisco. On the journey, the automaton Rooney designed is possessed by a ghost, whose fortunes are right on the mark. When she reveals a murder the circus owner was involved with, it puts Francie on his radar as a liability. Once they’ve reached their family, Rooney settles in well, while Francie entertains plans to travel the world with the fortune telling automaton. But her grandmother has other plans for her, as she puts Francie on display for all eligible suitors, regardless of how repulsive Francie finds them. Besides thwarting her grandmother, Francie must also evade the circus owner, who is set on her demise, and she proves herself up to the task.

Perils for Portents is a delightful historic YA novel, with elements of adventure and romance. It is well written and entertaining. I give it four quills.