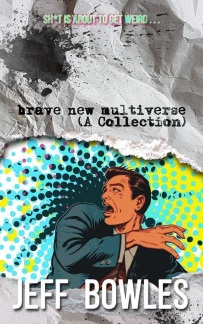 Brave New Multiverse is a collection of unusual and unique short stories by Jeff Bowles, in which there is never a dull moment. You may be amazed, amused, confused, or even a little disgusted, but you will not be bored with any of the stories in this collection.

Bowles combines the craft of short story with screenwriting to create an experimental writing style that somehow works.  His descriptive power is phenomenal, if a bit graphic. The worlds he has created may be strange and difficult to define, but they are also different from worlds encountered by any other author. In Itsies, ids are called itsies and you don’t got to love them, even if they wear a teddy bear suit. In The Many Deaths of Lazarus Lad, comic book heroes never ever die. In Detective Robot and the Murderous Spacetime Schism, robots and gorillas are detectives solving the case of the deceased dropping from the sky. In Donald Carmichael’s Brave New Multiverse: A trip to five very odd ‘verses’, where nothing is as it appears, or is it? And in Snip, Snip: where they take bigotry to new levels and have hang ups about testicles.

His characters are as diverse and unique as the worlds he’s created, and he pairs them into unanticipated couplings: Gorilla Todd and Detective Robot, an investigative team that can solve the crime, even in the face of the dead falling randomly from the sky; Donald Carmichael and Max, who don’t know love until it reaches out and bites them in the ass; Lazarus Lad and his egocentric dad, who know no other life; Nelson and Jay, who just wanted to help their injured pooch; Tug and Petunia, rude and obnoxious itsies, who may even be dangerous, belonging to Tom and Pamela, who don’t know the meaning of tough love.

Want to explore strange new worlds which you’ve never encountered before? Take a trip into any one of Jeff Bowles’ stories from this collection. I give Brave New Multiverse five quills.