← “Love/Madness/Demon”: A theological tale of fates
The future of education →

The Law of Attraction in Action

The phrase “summer movie season” has a totally different meaning this year, doesn’t it? Point of fact, there really isn’t one. For the most part, cinemas have shut down all over the world, but that doesn’t mean people aren’t still watching movies at home. Maybe it’s old favorites with your Netflix subscription. Just chilling on the couch with your family, windows open to cool the house after a hot summer day … doing whatever it is people are doing to stay the heck away from Coronavirus.

Don’t worry. I’m not judging. I’ve literally forced myself to watch the entire Skywalker Saga on Disney+ four times. That’s a lot of lightsaber fights. A lot of them.

So here’s the deal. Writing to be Read is primarily a book blog. We talk about writing, literacy, try to keep you up to date on stuff you might want to read, and there’s room for some offhand conversations here and there as well. Normally, this time of year brings us a deluge of film releases, many of which are based on bestselling books (assuming you don’t get pelted by Marvel and DC before you make it to the popcorn stand). Now that the only real new releases are coming via the timely advent of at-home video streaming, pickings are slim, but I’ve come to you today to discuss a new movie based on a bestseller that is … well, let’s just say it’s more pop culture spiritual life coach than YA dystopia or gritty crime thriller.

The Secret, a book that teaches readers about the Law of Attraction, released in 2006 and summarily took the world by storm. It was later turned into an equally popular documentary, and eventually, a full-range self-help empire of near Tony-Robins-like proportions.

For those unfamiliar, the core teaching of The Secret is that we can have anything we want, as long as we keep a positive mental attitude, focus on desired outcomes rather than undesired ones, and basically have faith that the universe will provide exactly what we want, if perhaps not in the way we expect it. Plenty of people say it’s silly, ludicrous, wishful thinking, but there are many, especially in the New Age spiritual community, who hold The Secret as gospel.

Back in 2006, a bright and shining period in time compared to how 2020 has felt so far, the notion seemed plausible and exciting. After all, isn’t it determination and perhaps something outside ourselves, call it luck or grace or even the divine, that brings things into our lives right when we need them most? But then don’t bad things happen to us, too? And isn’t it cruel to blame people for their misfortunes by insinuating a negative mindset brought it to them?

Well, maybe. But that doesn’t stop the machine from churning. Now, with our movie theaters shuttered and barren like ghost towns, the international self-help brand The Secret has produced a feature film: The Secret: Dare to Dream. It’s a real Hollywood flick. It’s got movie stars, a genuine movie script, pretty yet bland domesticized locations. What it lacks, however, is the basic knowledge that pop spirituality, proselytization, and popcorn entertainment kinda don’t mix.

In recent years, there’s been a resurgence, a kind of renaissance, in Christian filmmaking. God’s Not Dead, The Case For Christ, I Can Only Imagine, these are movies of moderate budget, moderate expectations, that hit their audience and generally seem to work for them. The Secret: Dare to Dream is interested in riding in on a similar horse, although with a little veiled new agey-ness to go along with it.

Regardless of what you believe, surely you must admit that when entertainment becomes preachy it’s just not as, well, entertaining. And Dare to Dream does become preachy. Pretty darn quickly. That’s the whole point, right?

Miranda Wells (Katie Holmes) is a single mom and local restaurant manager who could seriously use a new house and a more positive outlook on life. When she literally runs into a guy called Bray (Josh Lucas) and damages the front fender of her van, Bray turns into mister fix-it, and as far as the filmmakers are concerned, enters the action specifically to transform Miranda’s life using the Law of Attraction. There’s more plot happening here than that, of course. There’s a superstorm, a hell of a lot of home damage (which Bray also volunteers to fix), and something of a love triangle. 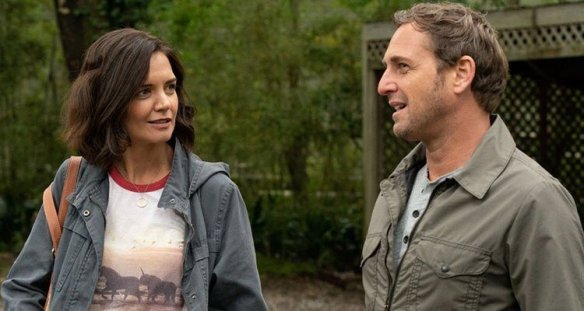 Katie Holmes and Josh Lucas in The Secret: Dare to Dream

I’m assuming people who are interested in this movie already believe in the Law of Attraction. Here’s a little “secret” for you. I sort of do, too, though the miraculous and unbelievable circumstances that tie Dare to Dream’s plot together have certainly never happened in my conscious daily experience. Still, I do believe in miracles, and I certainly believe our focus determines our reality. But some readers of The Secret have complained over the years that the book is way too dreamy. And you know what? This stuff is supposed to be ancient esoteric wisdom anyway, so what the hell is it doing in my Josh Lucas romance?!

That’s right, I forgot to mention Dare to Dream has love on the brain, and it takes a halfway decent stab at it, too. Not a total fail as a romance. Only problem is that educational tone, that preachiness, it pervades the entire proceedings. It’s clear that the negative people in the movie are on the wrong end of things, and it’s also clear this Bray fella is the proverbial music man of their lives, barging in and singing his song, improving everything with the utmost maximum charm at his disposal. Which is a lot of charm, as you can imagine.

Simple, right? Which is exactly what The Secret says about changing your life. In some ways, this is barely a movie, and it really ought to be pondered if books of a pseudo-spiritual nature, self-help-oriented and considered pure pablum by many, has any serious business being turned into a film Amazon wants me to Roku for $20.

I say it does not. But that doesn’t mean faith, positivity, and focus and determination are bad for us or don’t belong at the center of our popular storytelling. It’s just that transparent allegory—and trust me, this is the most transparent allegory you’ll ever find—turns people off. At least The Secret: Dare to Dream makes no bones about what it is.

I’m just waiting for the Deepak Chopra/Eckhart Tolle mashup superhero movie coming next year. It’ll be explosive. Or completely at peace. Depends on your point of view.

Jeff’s Movie Reviews gives The Secret: Dare to Dream a 6/10

5 Comments on “Jeff’s Movie Reviews – The Secret: Dare to Dream”