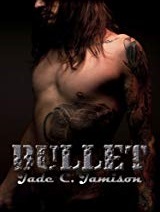 Jade: It took me forever to puzzle out exactly what genre I wrote.Back in 2013, the term “erotic romance” seemed to most capture what I wrote, but the “E” word is now becoming taboo.(I’m smiling as I write this.)Nowadays, the genre is being called “steamy contemporary romance,” although that may change yet again. But, anyway, I digress. Not only would I consider writing in other genres, I have. Within romance, I’ve written everything from romantic comedy to romantic suspense. Outside romance, I’ve written horror and nonfiction, but under another name, I’ve penned mystery, news writing, instructional pieces, academic literature, and even poetry.

Jade: I don’t know that writing romance comes naturally to me. Ten-plus years ago, I found that, no matter what I wrote, some aspect of romance became part of the story. So even though I have a tale to tell and even though the relationship is the key element in the story, making sure I have all the facets that make a romance satisfying to avid readers of the genre is not always easy, and it’s definitely not organic.

Why it appeals to me?  I haven’t a clue. I’m sure a psychologist would have a heyday with me.

Jade: Sex scenes are, by far, the hardest. They easily become the most tedious part as a reader as well. From some of my conversations with other authors, I don’t believe I’m alone. You want to keep things fresh, so to speak, and non-repetitive while at the same time you want to keep readers emotionally engaged. It’s easy to mess that up in those sorts of scenes—so I put a lot of pressure on myself to write scenes that are emotional and engaging.

The most fun part is when a character surprises me.  I think I know where the story is going and then BAM!  She does something completely unexpected, but I know it’s working and there’s no way I’ll change it.

Kaye: Which of your stories is your favorite? Why?

Kaye: Your sex scenes range in temperature from steamy, to sizzling, to blazing hot. What determines how hot the scenes get in each story? 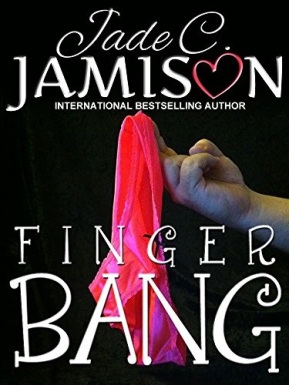 Jade: Part of it depends on the story itself. In my bestselling book Bullet the sex scenes got hotter as the story moved on. That was one of the ways I let the reader know the main character was maturing. It mostly depends on what I think readers will expect. Am I billing the book as super steamy (like Finger Bang), or am I emphasizing the story itself (like Savage)? But, honestly, I always thought they were all pretty close in steaminess. I guess I’m too close to the forest!

Kaye: Do you prefer to write during the day, or are your stories so hot they can only be written at night?

Jade: I actually do almost all of my writing in the early morning, from about 5:30-6:30 am. It’s the only quiet time I have and I find I’m far more creative when my brain is fresh.

Kaye: You’ve written over fifty books. What is the writing achievement are you most proud of?

Jade: I don’t know that I’ve “achieved” anything as an author, other than sharing my stories with the world.I guess, though, that I’m currently proud of my growth as an author. I’ve really taken a step back in an effort to realize that being prolific isn’t nearly as important as transporting a reader to a different world—so I’m proud of not letting my pride stop me from learning!

Kaye: What is one thing your readers would never guess about you?

Jade: I enjoy playing Pokemon Go.I used to play Pokemon games with my kids when they were little, and now they have me playing this silly game on my phone!!!

Kaye: In 2019, you released books 3 and 4 from your Matchmaker collection. They are described as Reverse Harem Romances on their covers. I can see lots of potential for steamy action there. Would you like to talk a little about this story collection? 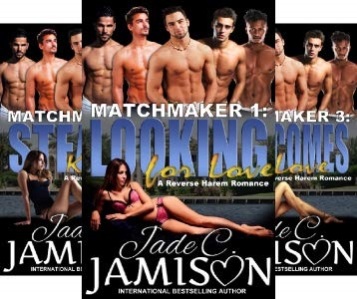 Jade: I’d taken a couple of marketing courses the year before, compelling me to “write to market”. So, I looked through Amazon’s top 100 contemporary romance books and found that Reverse Harem Romances were dominating at the time. At first, I thought that meant a literal harem, but with a woman surrounded by men. I discovered through my research that that’s not quite what Reverse Harem is all about. I like a challenge, so I decided to go for it. One of the courses I took is by one of the bestselling indie romance authors in the history of Amazon, and she advised writing a series with cliffhanger endings at the end of each book. That was another challenge. So, that’s the nuts and bolts of the series.

The story itself is about Claire, an actress struggling to make it in Hollywood. She tries out for a reality TV show called Matchmaker, hoping that if the right people see her, they might give her a chance as an actress. If nothing else, she’s bound to meet the love of her life. Her suitors are five gorgeous men who’ve been “guaranteed” to be a perfect match, but the audience gets to determine who stays and who goes. And, yes, there’s quite a bit of steam between the covers.

Kaye: I reviewed Heat: Book 1, which was really a short prelude to a larger story that will change the way you think about getting a message forever. But there is more to the story. Would you talk about Heat: The Complete Series? 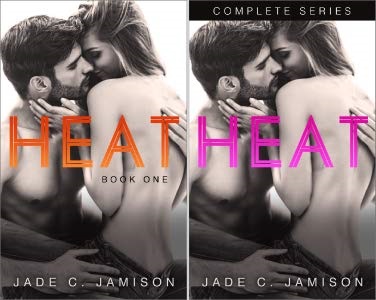 Jade: Heat was another challenge I couldn’t say no to.  Several years ago, I was approached by a publishing company in Australia about republishing one of my older series, and I did that with them.  While it never neared the level of success they’d promised, a year later they approached me about something new they were doing, inspired by stories James Patterson had been writing.  The basic premise for the romance stories was that you write a short but intense “intro,” followed by three more books, all following a particular formula—but very hot with cliffhangers at the end of each short book.  I really liked the idea, so I pitched what became Heat.  Unfortunately, it didn’t perform as well as I had hoped, so I took back my rights to it after a year and republished it.

So what you read in the free first part, Heat: Book One, is the beginnings of a steamy romance between Sergio and Rachel.  Rachel is actually a character from Finger Bang, and I’d been inspired to write a story about her for a long time.  When I was approached by this publishing company, I thought her story might be perfect for the format they’d talked about.  Because it’s shorter and steamier, there’s not as much depth to the characters, but that wasn’t the idea behind the series.  It’s meant to be intense, somewhat shocking, and super steamy.  Fun.  No ugly crying, no heart-wrenching moments.  Just pure, unadulterated fun.  What you read in Heat: Book One is a prelude to the rest of the story.  If you enjoyed the first part, you’ll love the complete story.

Kaye: What is next for Jade C. Jamison? What can your readers look forward to?

Jade: The biggest problem for me is I have so many things I want and need to write, and so little time.  I literally have over fifty book ideas outlined, but I’m currently working on a project. It’s a series called Small Town Secrets. I’ve taken about thirteen of my books off the shelves, and I’m re-purposing them. In an effort to be an even better writer, I’m rewriting eight of those books, but they are now all interconnected in this series. My review team has read the first one (Love and Lies) and loved it. I’m hoping to release six of those books in 2020.

I also have one book left in the Nicki Sosebee series. Book 12, Wake Up, ended on a cliffhanger, and so I can’t keep my readers waiting for too long. That book is fully plotted and I promise it will be satisfying! I just need to write it. But, I also have several other series I need to finish (Feverish, Codie Snow, Tangled Web), so we’ll see what I can tackle. I would love to write a lot more this year (like I said, fifty ideas and counting!) but I have a lot on my personal plate, so it all depends on how much I can get done in the time I have. I’d cross my fingers, but I can’t type while I do that!