← “Short Stories Not Forgotten” may be too short
“Kistishi Island”: An Unbelievable YA Journey →

I’m pleased to welcome speculative fiction author Kasi Blake to Writing to be Read today. Kasi likes to write about vampires and werewolves and witches, oh my! I invited Kasi to join us today because she’s doing something different with her 4-Ever Hunted series, which encourages reader participation. I thought was kind of clever, and I asked her to share her creative marketing idea with us. But first, lets learn a little about Kasi and her books.

Kaye: When did you know you wanted to be an author?

Kasi: When I was 12. I read The Outsiders in class and then started a short story. It slowly progressed from there.

Kaye: You have three series out. Would you like to tell us a little about each one?

Kasi: The Rule series is basically a YA Urban Fantasy series about a vampire boy who goes legit. Meaning, he turns mortal through a freak event and loses the fangs. This is great for Jack, because he hated being a vampire. He just wants to be normal, but then he falls for a werewolf hunter and discovers his true destiny.

The Witch-Game books are about teen girls with powers. They use them to play games at school beginning with one called Crushed. They enchant boys and compel them to do their bidding. Witch Hunt is more like hide-n-seek for witches. They both have romance and a bit of mystery. 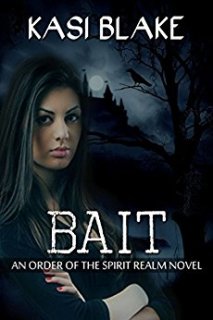 Bait starts off the Order of the Spirit Realm series. The titles are a little strange here: Bait, Hunter, Warrior, Legend. These are the ranks the students at Van Helsing’s school receive as they work their way up the hunting ladder. Bay-Lee is his daughter, but she doesn’t get special treatment. In fact, the gorgeous hunter assigned to be her mentor hates her on sight. This series is set in New Zealand and has all the action, sweet romance, and monsters you could possibly hope for.

Kaye: In 4-Ever Hunted, you’re offering your readers a say in how the series turns out. This is a cool and unique thing to do in your writing. Would you like to tell us how that works?

Kasi: After you read 4-Ever Hunted, there is a link at the end explaining that you can choose Dani or Scarlet as his love interest. Read the book and at the end, there is a link to click on, which takes you to my 4-Ever Hunted Facebook page, where you can vote for the girl you’d like to see him end up with at the end of the series. This book is free with Kindle Unlimited, so no purchase is necessary to vote, but you do need to read the story.

Also, feel free to post and try to sway people to your side in the comments. You can change your vote until voting closes after I begin to write book three. Majority rules. I like both girls, so I know how to make either relationship work, depending on who is picked. Trick will wind up falling in love with and sharing a romance (not to mention action-packed adventure) in book three and four.  Think of it as team Edward or team Jacob, with the readers in control. It’s all up to you, the readers.

Kaye: Legend is your most recent release. Would you like to tell us a little about that?

Kasi: Legend is the final book in the Order of the Spirit Realm series and wraps up life at Van Helsing’s school for Bay-Lee, Nick, Mike, and the rest of the young hunters. Monsters from the other realm have found a way to blow the doorway between them wide open. It’s all-out war. Who will win? Who will survive?

Kaye: What are you working on now? What can we expect in the future from Kasi Blake?

Kasi: I am currently writing 4-Ever Cursed, book two in the 4-Ever Hunted series. I plan to do all four books in a row, if possible. Then, I have an exciting fairy tale series like none other coming your way. Cursed by a Grimm is a dark fairy tale about a fading faerie realm, the wicked Ivory Queen who will do anything to stay in power, and a strange creature hiding in the shadows. The Grimm will either help Shayne save the realm and find true love. Or he will lead her down the wrong path and destroy everything.

Kaye: How do you decide the titles for your books? Where does the title come in the process for you?

Kasi: The titles come from the books themselves. I usually don’t name them until the book is either done or the entire outline is at least finished. Vampires Rule is something Cowboy says to Jack all the time. He loves being a vampire; Jack loathes it. Then it goes from there. Werewolves Rule and so on. Crushed and Witch Hunt are named after the games the witches play. Bait, as I already said, was named after the ranks the hunters get.

4-Ever Hunted is unusual because it comes from the fact that Cowboy and Summer want a fourth for their group. Cowboy is obsessed with having four members. They make the mistake of setting their sights on a hunter though. The question is, will Trick become the thing he hates most in order to save his own life?

Kaye: Are you a plotter or a pantser? Why?

Kasi: Plotter. I feel like I need a map so I know where I’ll end up. I don’t understand pantsers. I would get lost without my map. Although, the outline does change several times during the process as I write. I leave room for character growth. Sometimes they do things that surprise me and turn my outline upside-down.

Kaye: You write about vampires and werewolves and shape shifters. What kind of research do you find yourself doing for your stories?

Kasi: I only research creatures that are new to me. Most of the mythology I make up so that it will be new and fresh like how vampires and werewolves were created by a faerie.

Kaye: What do you do for cover art? DIY, or hired out, or cookie cutter prefab?

Kasi: I started off doing them on my own, and they were not that great. Crushed and Witch Hunt were published by Clean Teen Publishing, so the covers were created by the awesome Marya Heidel. The Bait series and the vampire series were done by a woman just starting out in the business. I don’t even think she does it anymore. The awesome 4-Ever Hunted books are all by a great artist I found on Fiverr. Off the top of my head, I don’t remember her name, but she is listed at the front of the book as the designer.

Kaye: You have a blog, Supernatural Slant. How did that start?

Kasi: They say all authors need a blog, so this started off as a blog about writing, but I am obsessed with the show Supernatural. So, it went off more in that direction. I still blog about my books, sometimes books I like, but the blog is about Supernatural, the show, and shows like it now more than anything else.

Kaye: What time of day do you prefer to do your writing?

Kasi: I like to write late at night and early in the morning because there are no distractions then. I’m not getting phone calls, and people aren’t asking me to do favors for them or help them out or just wanting to talk. Plus, it is so peaceful when others are asleep.

Kaye: Besides writing, what are your favorite things to do?

Kasi: Reading, shopping, hanging with friends, and I love all my animals. I live on a farm, so taking care of them and watching them do silly things is always entertaining.

Kaye: Which author, dead or alive, would you love to have lunch with?

Kasi: I guess I would have to say JK Rowling, because I really want to know what it feels like to have your world made not only in movies but also in a theme park. I’d never want to go home.

Kaye: My final question is one you may get asked a lot because of your Rule series, but you had to know it was coming. Who does actually rule, vampires or werewolves?

Kasi: I go back and forth on this. Sometimes I like vampires better, and sometimes I prefer werewolves. It depends on which character I’m writing at the time.

I want to thank Kasi Blake for joining us today, sharing about her books and letting us get to know her. If you want to know more about Kasi or her books, you can check out her website, or her author page on either Amazon or Goodreads.

Next week there won’t be a Monday post because I’m being interviewed on Authors Talk About It and I’ll be promoting that. Then, on Monday, September 4th, we’ll be treated to an excerpt form author Scerina Elizabeth, before delving into my seven part series Book Marketing – What Works? on Monday September 11th. So don’t miss it, on Writing to be Read.