← What’s a Reviewer to Do?
Rethinking the “Playground for the Gods” series… again →

“Angel Falls Texas: The Traveler”: Not a Western Great 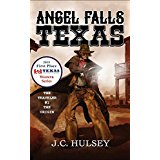 I like westerns. Thanks to my creative writing instructor and adviser, I discovered that I like to write westerns, and I’m fairly good at it. So, I read Louis Lamour, Zane Grey and other western authors to absorb as much from their talents as I can, applying it to my own writing. I picked up Angel Falls Texas: The Traveler #1 The Origins by J.C. Hulsey in anticipation of a good western tale. What I got instead was a poorly written story, in which the characters’ actions make little sense.

Angel Falls Texas lacks the story line and plot points to hold readers’ interests. Characters are two dimensional and lack depth, making it difficult to connect and invest themselves in the story. There are many flaws in logic which make it nearly impossible to suspend disbelief, and there is a lot of telling, rather than showing.

A teenage boy, Jed, watches as his pa is killed and kills his father’s assailant, who happens to be the sheriff’s brother. So, he sets out on the run, assuming the sheriff will come after him, not even stopping by the home place to gather supplies for the journey. He makes friends along the way, who travel with him, because they apparently have no lives of their own, and end up back where he started, in Angel Falls, where he learns the sheriff is still gunning for him. When the sheriff returns, instead of the show down one would expect, and perhaps even anticipate,  the protagonist runs away, thus avoiding confrontation. The sheriff never even sees him, so it’s not even a close call.

In fact, there is no confrontation throughout the story. There is no conflict, no obstacles to overcome. Jed and his new friends go where they please and do what they want unhindered in any way, with no apparent destination in mind. The characters are not challenged in any way and they have no clear goal to accomplish or strive toward.  They do not have to overcome other people, the elements, or the landscape. Jed spends several months helping one new friend fix up his ranch, but when a neighboring rancher shows up and claims the ranch for his own, his friend packs up and takes to the trail with our hero, giving up without a fight, or even a word of protest.

If that weren’t bad enough, the book is riddled with typos and grammar errors. This is a pet peeve of mine because poor quality books which are self-published give self-publishing as a whole a bad name, adding to the stigma that has been placed on self-published authors. This is one of those books. The cover says this book won first place in Texas Western series, but I don’t see it.

As a fan and author of the western genre, I can only give Angel Falls Texas: The Traveler #1 The Origin one quill.

4 Comments on ““Angel Falls Texas: The Traveler”: Not a Western Great”