← Weekly Writing Memo: Know Your Theme
“DeadPool” works on so many levels →

A Tribute to My Son 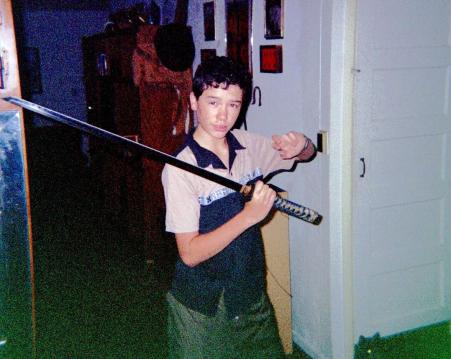 Wednesday the 21st is the 8th anniversary of the death of my son, Michael Daniel Lee Booth. Since his death, September has always been a pretty difficult month for me. His birthday was the 9th. He had just turned nineteen when he took his own life. I relate well to the song by Green Day, “Wake Me Up When September Ends”, but of course, I can’t sleep the whole month away. It’s just not practical. So, instead I try and find some way to cope by honoring him in some way.

Since his death, I’ve talked a lot about how I want to write a book that will tell his story, and mine too I suppose, or at least the story of how his death affected me, and changed my life. When I first began thinking about it, I referred to it as a memoir, but it has to be more than that because there are so many others his death affected. I keep putting off writing it because I’m not sure I’m ready to dredge up all the memories that writing his story would bring. Some of them are still so painful it seems as if they only occurred yesterday.

For a long time after Mike died, it seemed that he was the only thing I could write about, and many of those writings will eventually be incorporated into the book. For now though, I’d like to make this blog post in honor of him, and share with you the eulogy I wrote. I stood up and read it at his funeral with tears streaming down my face, my heart breaking inside of me. People said it was brave of me to get up there and read it in front of all those that attended his funeral, and there were a lot. But for me, it was just something that I had to do. After all, I am a writer and he was my son.

When Mike Booth said, “I love you”, it was forever. And when he called you his friend, you knew you could depend on him to stand by you, no matter what.  He loved to try new things, to explore and to learn.  He had a love for life and for all that he held sacred.  Mike strove for excellence in all that he did, and lived by a code of honor that was extremely tough to uphold.  His Christian upbringing was intermixed with Hindu and Buddhist beliefs to make up the tapestry of his own personal belief system that was disciplined and unyielding.  When he made mistakes, Mike was harder on himself than anyone else ever could have been.

When he got mixed up with the wrong people and things, he made some poor choices.  He did not deny what he had done, but instead stood up and accepted the punishment that was given to him.  He tried to make amends for his wrongs and was on his way to accomplishing that goal.  He expressed great sorrow for his errors, and inflicted emotional punishment on himself over and above what the law could ever require of him.

He had a strong will and could accomplish anything that he set his mind to, including learning to speak Japanese and perform martial arts skillfully, all on his own.  Mike had a love for Japanese culture and he could have lived off of green tea and sushi.  His knowledge and skills were gladly shared with those who wished to learn.  Mike had a love for nature and enjoyed all kinds of outdoor activities, including skiing, hunting, fishing and hiking.  His imagination was endless and he created stories and drawings that reveal a talent far beyond his tender youth.

Mike was so much to so many people; a loving son, a dependable big brother, a doting little brother, a respectful grandson, a loyal friend and a devoted husband. He loved his dog, Zaar, who was a companion and loyal friend to him.  Mike was sensitive, and hurt so easily and so deeply, yet he was too strong willed to ever let it show outwardly.  Only through his writing, can we glimpse the love that he embraced or the pain that he felt.   When he loved, he loved with all of his being.  Mike was fun loving and enjoyed spending time with those that were important in his life.  He had beautiful curls and the most wonderful smile that could light up my heart whenever I saw it.  Mike turned 19 three weeks ago.  He had a whole life ahead of him.  He was much too young to be called home to God.