In early October, 2005 my partner and I were driving our new 38 foot motorhome from Ft. Lauderdale to Petaluma,CA.  It was going to be a four thousand mile drive on I-10, the southernmost of our nation’s interstate highway system.  As we drew into the outskirts of Pensacola we noted the ravaged condition of the trees, fences, billboard signs and the Interstate itself.  The campgrounds were jam packed.  We only found a site because someone had suffered a heart attack and was rushed to the hospital twenty minutes before we pulled into the Pensacola KOA.

We were in the zone of Hurricane Katrina’s wrath and the next four hundred miles would be like driving through a poorly kept secret.  Along the highway were big plywood signs done in red magic marker: FEMA, they said, and sometimes an arrow pointed the way down a dirt road.  These signs were emblematic of the slipshod management of a terrible disaster.  Imagine, plywood planks with red magic marker: this way to the internment camp of white trailers.

Ahead of us lay New Orleans.  We saw the city only a few weeks after it was submerged and torn all to hell.  When we began watching the TV series Treme (trem-may), we had a visceral sense of connection to the experiences of the characters.

TREME is producer/director David Simon’s series about post-Katrina New Orleans.  Simon is the creator of crime masterworks like HOMICIDE and THE WIRE.  TREME is something different.  It is a filmic mural that depicts conditions in a ravaged community.  Suspense is not what draws the viewer into the show.  It’s the characters that keep us watching.

One of the major characters of the series is New Orleans itself. There is a depth of culture in this city that is unmatched by any other American city.  Treme is one of the neighborhoods in this town, an area where musicians live and form their community.  They play at one another’s gigs.  They do funerals, following  wheeled black carriages in stately slow-march.  They play at nightclubs where the patrons and musicians alike are having so much fun that it seems almost unreal, as if there can’t possibly be so much joy in this troubled world.  But there it is: real music, dancing, carrying-on and everyone is having a freaking great time.

There’s nothing strident about Simon’s portrait of New Orleans.  It’s a town trying to bounce back, but the bounce is a little flat.  People want to rebuild their homes but the promised insurance checks and subsidies keep getting lost in bureaucracy.  A man has spent  three years rebuilding his home with his own money and his own skills. Suddenly a city inspector appears and cuts off his water and power. “The City” wants to see the original deed on the property.  It’s a document whose origins go back two hundred years.  It’s lost in history, lost in the flood.  Can he PROVE that his family has occupied this parcel of land since 1824? 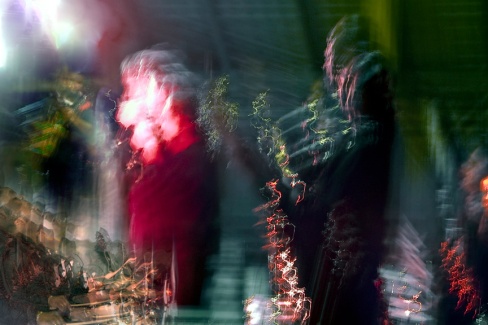 He forgot a payoff to someone.  He’s lost track of the fifties and hundreds he’s hemorrhaged to fees and penalties.

New Orleans has become a scene where politicians and developers gather like ghouls to create a theme park where there was once a city.  If they have things their way, it will be resurrected as NewOrleansLand or Cajun-O-Rama.  The citizens of New Orleans are fighting back.  They know their city will never be the same.  But the disaster has made them aware of themselves as an extended family.  There is something special about being a New Orleans native.  There’s a terminology, a language, a history and a lot of blood that goes into the making of a citizen of New Orleans.

TREME is strangely relaxing to watch.  Real-life characters like musicians  Carla Thomas, Kermit Ruffins and Allen Toussaint thread through the plot playing themselves, providing a sound track of amazing skill and vivacity.  TREME is loaded with top of the line music.

“Let the good times roll”, or “Laissez le bon temps roulez” is the unofficial motto of Mardi Gras.  The good times may roll but a new motto is emerging from the frustrated natives of New Orleans.

I will paraphrase the words of Sofia, the sixteen year old daughter of  civil rights lawyer Toni Bernette, played by the fantastic Melissa Leo.  Every day Sofia retreats to her bedroom, closes the door, aims the laptop camera at her face and uploads to YouTube a monologue of rage and bitterness.

“Fuck you, man, fuck you!” she says.  “If you’re not going to help us, at least don’t hinder us.  Just get the fuck out of our way!” THAT is the new motto of New Orleans.

A Midwesterner by birth, Arthur Rosch migrated to the West Coast just in time to be a hippie but discovered that he was more connected to the Beatnik generation. He harkened back to an Old School world of jazz, poetry, painting and photography. In the Eighties he received Playboy Magazine’s Best Short Story Award for a comic view of a planet where there are six genders. The timing was not good.  His life was falling apart as he struggled with addiction and depression. He experienced the reality of the streets for more than a decade. Putting himself back together was the defining experience of his life. It wasn’t easy. It did, however, nurture his literary soul. He has a passion for astronomy, photography, history, psychology and the weird puzzle of human experience. He is currently a certified Seniors Peer Counselor in Sonoma County, California. Come visit his blogs and photo sites. www.artrosch.com and http://bit.ly/2uyxZbv.

Want to be sure not to miss any of Art’s Visual Media Reviews segments? Subscribe to Writing to be Read for e-mail notifications whenever new content is posted or follow WtbR on WordPress.