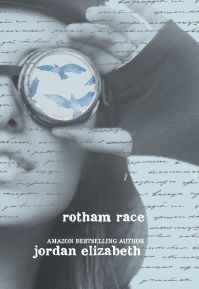 Rotham Race, by Jordan Elizabeth, is a post-apocalyptic, dystopian YA romance; a crossing of genres that works well for the most part. The story has a good plot with a smooth flow, although the pacing felt rushed at times. The world which Jordan Elizabeth has created, where a nuclear blast annihilated half of country, and the government can’t be trusted, is both believable and thought provoking, and her characters are both relatable and likeable.

The Rotham Race is a tradition where young men and women go out into the wastelands left by a nuclear blast to find a microchip which can return things to the way they were, or so they are told.  Each year dozens of racers set off into the wastelands never to be seen again. Troy Vonpackal is an idealistic orphan, determined to find the chip and save the world, and Barbie Chambers is the orphan who can help him achieve his goal. When fate throws them together, they find themselves falling in love, but there are many obstacles which stand in their way. When Troy returns with the chip, they both learn that the government may not have been entirely truthful about the race or the chip, and the truth may change their lives forever.

My only criticism is that there wasn’t enough foreshadowing to suspend my disbelief in certain places. Many of the conflicts are resolved with little difficulty, or in some cases, the solution is just handed to them, making some events seem too convenient for me to buy in. Yet, I can’t say this detracted from my enjoyment of the story, which was quite entertaining overall.

A quick and easy read, with an ending that comes too sudden. I felt like the characters had more to give, so maybe there will be a sequel. I give Rotham Race four quills.

One Comment on ““Rotham Race”: A Story of Orphan Love”