← “How Smoke Got Out of the Chimneys”: An Entertaining Ditty
“Bullet”: The Story of a Toxic Romance →

It’s All About Love 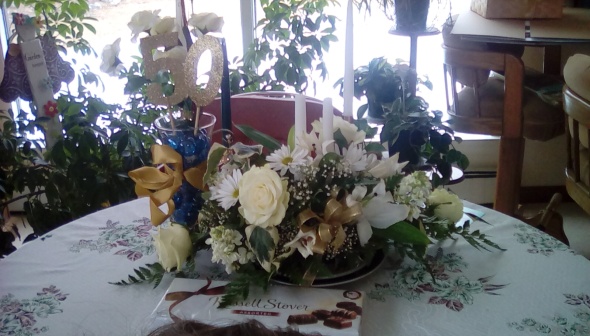 I recently attended a fiftieth anniversary party for a couple that I know. Their son and daughter-in-law put it all together for them, and it was a really nice affair. It was quite touching to see the loving care that went into all the preparations and listen as several people rose to tell stories about the celebrated couple, some examples of their kind hearts or their love for one another. Many of the stories drew quite a few chuckles from the guests.

It is not surprising that their marriage had lasted fifty years, for anyone who has ever seen them together can see that they not only love each other, but that they are still in love with one another. Theirs is a true life love story.

As a writer, of course, my observations about people often find their way into my stories. While I don’t turn my family and friends into characters, I do give my characters traits from real people at times. So, as I listened to the stories being told about them, I thought about all the ways my friends’ actions make their love for one another obvious, and how I might use some of them to create a heart warming love story with characters that are convincing.

It’s the little things, such as how she looks her husband in the eyes, and says, “I love you”, several times each day. To the observer, the expression of love on her face leaves little doubt that she means those words with all her heart. And to see the look of adoration in his eyes as he gazes into hers, it is obvious that love is reciprocated. That’s the kind of thing that I need to portray on the page to show depth of the love of my characters.

Their love shows in the courtesy and respect they give one another. She never fails to ask whay he’d like to eat before she begins the preparation of each meal. Although at 75, he now requires a caregiver to assist him with his daily needs, he stillmanages to surprise her with the perfect gift on special occasions. It shows in the tenderness of her voice when she speaks to him and the adoration in his reply. These all could be used by a skilled hand to show readers that your character couple loves one another deeply.

Now that I think about it, their relationship might make a story in and of itself, of the nonfiction variety. For many couples, the stroke he suffered two years ago would mean separation, with him going into a nursing facility, where he could receive the proper care, but not this couple. No. There was never any thought of separating from one another. Instead, my friends left their beautiful tri-level home for a year and a half to live in a single level duplex during his recovery. They adapted the tri-level to accommodate his needs and they sleep next to one another in their own bed today. They did what they had to do to remain together.that

Now, if you ask me, that’s love. If I can portray just a little bit of that kind of love in my writing, I would consider it a great accomplishment. Think about it. Love is a great motivator for your characters, can pose obstacles which are rough to overcome, and can give your characters an unbreakable bond offering strength to beat all the odds. When you get right down to it, the cornerstone of most stories is love.