“Tabitha’s Death”: a Y.A. novel that dares to journey into taboo realms 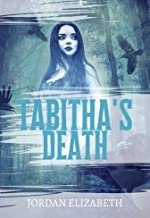 Tabitha’s Death, by Jordan Elizabeth is a dark fantasy journey into death and beyond. This book is masterfully crafted to present the often taboo subjects of depression, cutting and teen suicide. Speaking as someone who has lost a son to teen suicide, I thought the subject matter was handled with sensitivity and tact. Even as a work of fiction, Tabitha’s Death carries messages many teens may need to hear.

Tabitha thinks she wants to die and tries to take her own life, but she finds it’s not that easy.  The Grey Man snatches her away from death and won’t let her die until she completes certain tasks for him. As she journey’s through the strange realms beyond death, she learns that there’s more going on beyond death’s doors than she’d realized and her life maybe wasn’t so bad.

A truly inspirational approach to Y.A. fiction, resulting in an entertaining, yet thought provoking story. I give Tabitha’s Death five quills.

5 Comments on ““Tabitha’s Death”: a Y.A. novel that dares to journey into taboo realms”