← Still Time to Get Submissions in for the WordCrafter Paranormal Short Story Contest
Playground for the Gods: A science fantasy adventure series that almost wasn’t →

“Shadow Blade”: A high fantasy novel of intrigue and mystery 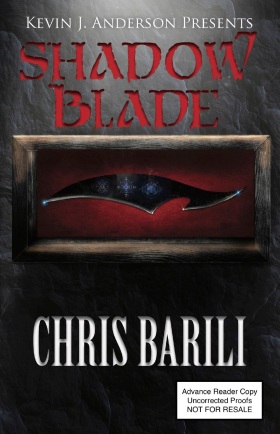 Spies and assassins, deception, adventure, magic – Shadow Blade, by Chris Barili has it all. With an intriguing story line that keeps readers guessing, with twists and turns around every corner, this story is everything a fantasy adventure should be. In the tradition of high fantasy, Barili has created a rich medieval style world of kings and castles, princesses and assassins, where magic is addictive and nothing is as it seems.

When a Denari Lai assassin falls in love with his target, it’s pretty certain that things are going to get complicated. Throw a second assassin into the mix and it’s near certain that there will be trouble and things may not end well. As you get to know Ashai, the Denari Lai assassin whose heart may be bigger than his training, and Princess Makari, whose kindness has earned the adoration and respect of an entire kingdom, you’ll find that you can’t help but root for them both to triumph against all odds.

Ashai didn’t intend to fall in love with Makari, but when he does it proves to be quite a dilemma. His love for her goes against everything he’s been taught, causing him to question his training. When a Denari Lai is set on a target, he stops at nothing to accomplish the sanction, but in a sudden turn of the tables, Ashai will now stop at nothing to prevent it. In his quest to save the woman who now haunts his dreams, he becomes a target. He doesn’t know who to trust, but he finds allies in some unsuspected places, enemies lurking in the shadows, and a surprise around every corner. He’ll do anything to keep Makari safe, even forfeiting the very magic that he draws his strength from and risking his very existence.

Chris Barili has crafted a delightful fantasy adventure in Shadow Blade. It has a well- developed fantasy world, with unique and memorable characters that will stay with you. You won’t want to put it down. I give it five quills.

One Comment on ““Shadow Blade”: A high fantasy novel of intrigue and mystery”